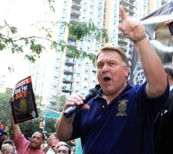 We bring you the latest from the Detroit News:


James P. Hoffa is expected to easily win re-election to another five-year term as president of the 1.4 million-member International Brotherhood of Teamsters, officials said Thursday.

According to a tally posted on a union website, Hoffa — who has been president since 1999 — has 57 percent of the vote, with two challengers splitting the remainder of the votes.
Hoffa has 97,046 votes, while challenger Fred Gegare has 42,480 votes and Sandy Pope 30,279 votes.

To date, the vote has been counted in the southern, central and eastern regions, with the western region and Canada still to count. The remaining regions will include about 65,000 votes to count, officials said.

In an interview Thursday, Hoffa said he expected to win with more than 60 percent of the vote.

"This is a vindication for everything we've worked for," Hoffa said. "We've worked to keep the union strong during the worst economy in 80 years."

Posted by Teamster Power at 6:34 PM