IN statehouse 'peppered with protests' 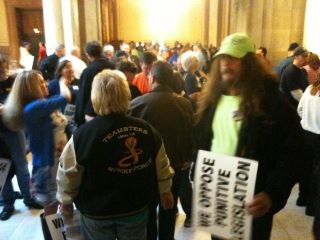 Teamsters shuttled working people from Local 135 in Indianapolis to the Statehouse today to tell lawmakers that right-to-work is wrong for Indiana. It's "Organization Day," the first day of a legislative session in which the Republican leadership says right-to-work (for LESS) is the top priority.

We followed the action on the superb StandUpForHoosiers Facebook page. (Please "Like" it if you haven't already.)

Working people turned out in droves, many wearing their union jackets and carrying signs. We're hearing thousands are at the Statehouse, and photos show packed hallways. The crowd cheered, "We are the 99 percent" at the House window. Crowd noise -- loud crowd noise -- could also be heard during the Senate session.

Republican lawmakers refused to talk to constituents. That generated quite a few negative comments on Facebook, including one referring to cockroaches hiding in the dark.

Many brought signs. One of our favorites: "Union Lifelines, Not State Bread Lines."


Indiana lawmakers are headed back to work at the statehouse for Organization Day.

The day usually slated for quiet organization will be marked this year by the loud protests of hundreds angered by the 'Right to Work' bill. The bill is first on this year's agenda and was the reason for last year's walk-out by Democrats.

Indiana Republicans may have another Ohio -- or Wisconsin -- on their hands. Is that what they really want?
Posted by Teamster Power at 2:21 PM