'A Teamsters semi is back on the square!!!' in WI 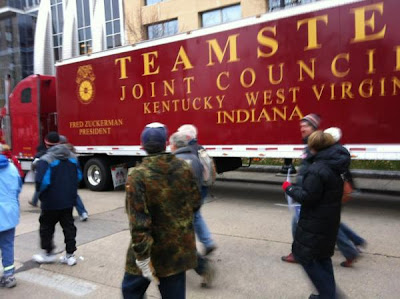 Tweeters were excited to see a Teamsters semi back on Capitol Square. Back during the spring protests, Joint Council 39's semi was parked on the square for weeks. peerless blogger blue cheddar told us how good it was to see such a big, bold, proud union symbol.


A Teamsters semi is back on the square!!!

Today, Joint Council 39 is running a can drive in conjunction with the rally ("Can Scott Walker" -- get it?). People are signing petitions to recall both Koch whore Gov. Scott Walker and his lieutenant governor, Rebecca Kleefisch.


Organized under the banner of United Wisconsin, the campaign officially started at midnight on Tuesday, November 15, and runs for a total of 60 days, during which time organizers will attempt to collect more than 540,208 total validated signatures from state voters to trigger a recall election.

blue cheddar tells us they've already collected 105,000. Out on the Square, people are using recycling bins as tables to sign petitions. The Solidarity Singers (who sing union songs every weekday at noon in the Statehouse) are leading the crowd in the "Roll Out the Recall" Polka.

Inside the Capitol, the Rotunda is rocking with drums and cowbells and chants of "Hey, hey, ho, ho, Scott Walker has got to go." @legaleagle tells us,

"Wisconsin families will not abandon Wisconsin children" gets a resounding cheer from the crowd!


Teachers on the March in Wisconsin! Teamsters, FireFighters, You and Me, and Puppies for Democracy!


I'd like to thank the 50 counter protesters for coming, as everyone who is here just committed to working harder to defeat you! #WIrally