Kochs didn't do too well in NJ either on Tuesday 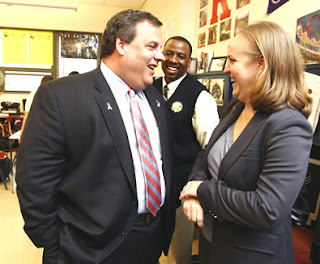 ﻿﻿﻿﻿We were so joyful over the stunning defeat of SB5 in Ohio that we completely overlooked the results in New Jersey. Chris Christie, a Governor Gone Wild (and Benedict Arnold David Koch's "kind of guy"), suffered a setback on Tuesday as the backlash against anti-worker politicians reached the Garden State.

Christie's union-bullying didn't go over well with New Jersey voters, even after he raised a ton of money for Republicans. The New York Times reported:


Mr. Christie’s protracted flirtation with a presidential run this year made him a powerful fund-raising draw, and New Jersey Republicans said he helped them raise more than $5.5 million.

Over the last week, the governor placed about $500,000 worth of television advertisements in the New York and Philadelphia media markets, in which he declared that “the New Jersey comeback has begun,” trumpeted his efforts to reform public pensions and control property taxes, promised to create jobs and urged voters to support candidates like Mr. Driscoll “to help me finish the job.”

But Mr. Christie ran those advertisements only on behalf of candidates in three Senate contests and one Assembly district — all of which were won by Democrats.

New Jersey Democrats claimed history was made on Tuesday -- by them, writes NorthJersey.com. Then there's this from Bloomberg:


New Jersey Republicans lost one seat in the state Legislature even after Governor Chris Christie campaigned for candidates and drew out-of-state donations.

Democrats maintained their 24-16 control over the Senate and added one seat in the Assembly, giving them a 48-32 edge, according to the Associated Press and Star-Ledger. Votes for all 120 seats in the Legislature were cast yesterday.

In two Senate races where Christie campaigned and raised money, Republicans failed to unseat incumbent Democrats in the district that includes Atlantic City and in the election to represent central Bergen County.

“I have a feeling there’s not much of a party in Drumthwacket tonight,” said Democrat Robert Gordon, who held onto his Senate seat in the Bergen County race, referring to the governor’s mansion in Princeton.

So add New Jersey to Ohio, Iowa, Arizona and Maine where the Koch brothers' tentacles failed to tighten their grip around state government. Such a shame.
Posted by Teamster Power at 4:53 PM