Despite sleazy tactics, OH's SB5 is on the ropes 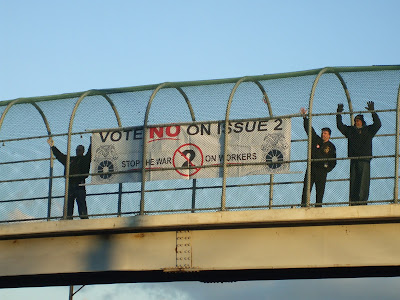 Cross your fingers, everybody. Today's the day Ohioans vote on corporate stooge Gov. John Kasich's union-busting bill, SB5. The bill would take away the collective bargaining rights for Teamster nurses, corrections officers and snowplow drivers in Ohio. Teamsters in both the public and private sectors -- including warehouse workers and truck drivers -- have worked their butts off collecting signatures, phone banking, going door-to-door and posting giant messages on Ohio's highway overpasses.

In the "What Else Is New?" Department, Greg Sargent at the Washington Post reports the other side has been using sleazy last-minute tactics:


In case you needed another sign of how far right wing groups are willing to go in a last ditch effort to avoid defeat in the Ohio labor fight, check out this tactic.

A flyer is making the rounds in Ohio (which you can view below) that advertises a “new hotline” designed to fight the “misinformation” being spread about Issue 2, the referendum that would affirm Governor John Kasich’s law rolling back public employee bargaining rights.
The flyer directs voters to call a phone number, where they can listen to a “short recorded message summarizing the issue” and get “real facts” about it.

But it turns out the recorded call makes all kinds of lurid claims against a No vote on the referendum — and even advances the argument that a No vote would be bad for public workers and force layoffs of cops and firefighters.

The flyer is not sourced to any group, aside from saying at the bottom: “Coast,” and “Gocoast on Twitter.” That’s a reference to a group called the “Coalition Opposed to Additional Spending and Taxes,” which has no listed phone number, but has surfaced on the conservative side of Ohio fights in the past.

Mother Jones reports the polls are looking good for our side.


It is D-Day for Gov. John Kasich's anti-union law. Ohioans go to the polls today in one of the most anticipated off-year elections to decide Issue 2, a referendum on whether to repeal Kasich's law that curtails collective bargaining rights for public sector workers. Voters will also approve or reject Issue 3, a misguided constitutional amendment intended to exempt Ohioans from a federal health insurance mandate. Unions, businesses, trade groups, and out-of-state political outfits have spent more than $30 million to sway the vote on both measures. Polls show Issue 2 losing...

It's not over 'til it's over, though. We're holding our breath.
Posted by Teamster Power at 10:03 AM