9 arrested in tense scene at Sotheby's 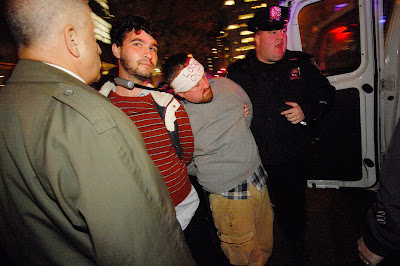 Protesters who disrupted a Sotheby's auction in solidarity with 43 locked-out Teamster art handlers last night were dragged from the building and arrested. Police officers taking the nine protesters into vans had to walk through a loud raucous crowd waving signs, taking pictures and chanting "shame."

It wasn't just the chants that broke the usual serenity of the tony Upper East Side neighborhood. Misery lights flashed against the auction house as a brass band played and whistles and horns shrieked against loud, steady drumbeats. Watch it on this video. 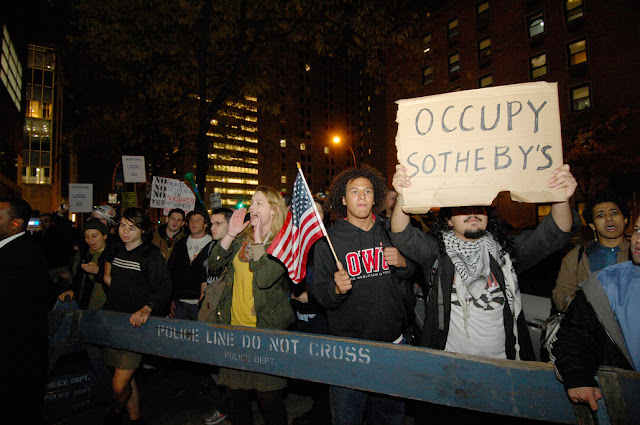 
Union workers and Occupy Wall Street activists gave a rough welcome to well-heeled Sotheby's clients as they arrived in limousines to attend an auction of contemporary art in New York.

More than 100 protestors screamed abuse and blew ear-splitting whistles as men in suits and streams of thin women in expensive jewels and high-heels entered the glass-faced Sotheby's building in Manhattan. 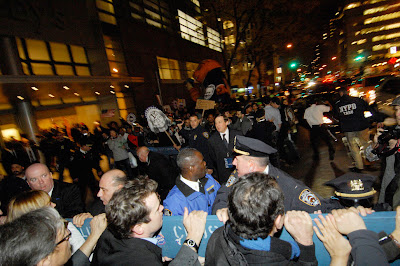 The atmosphere became hostile as enraged demonstrators yelled at the elegantly clad art collectors, forcing them to walk the gantlet under escort of police and black-suited Sotheby's security staff.

A huge blow-up rat and another blow up effigy representing a "fat cat" clutching a worker dominated the sidewalk, while Sotheby's employees looked anxiously out from the glass-walled lobby.

"Art for the masses, not the upper classes," protestors yelled.

Sotheby's can't be happy with the press attention. Yesterday the auction house's troubles were reported in two New York Times stories. One mentioned the bitter contract dispute. The other described efforts to oust James Murdoch -- the son of billionaire right-wing press mogul Rupert Murdoch -- from Sotheby's board.

The New York Observer reported on the protest as class warfare, naming the names of the 1 percent who attended the auction:


We prodded the Teamster to tell us who the buyers were. “The Mugrabi family is already in there,” he said. “Oh! Larry Gagosian is here.” A spectacled man with a bloated face walked brusquely by and slipped into one of the revolving doors. “Steve Cohen!” our guide identified. “That was Steve Cohen, the billionaire art collector.”


We found ourselves next to a UAW worker who shouted ”Shame on you!” at two gentlemen who had just hopped out of a cab.

“They don’t seem ashamed,” we felt compelled to mention.

That rang true. Of all the Occupy Wall Street stunts–even the march to the homes of millionaires–this protest was the only one that felt like it had the real rumblings of class war.

Posted by Teamster Power at 6:44 AM