Awwww. Foreclosure mill that mocked the homeless goes belly up 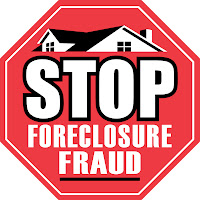 A law firm that doctored documents so they could throw people out of their homes said yesterday it was forced to close.


In one, two Baum employees are dressed like homeless people. One is holding a bottle of liquor. The other has a sign around her neck that reads: “3rd party squatter. I lost my home and I was never served.” My source said that “I was never served” is meant to mock “the typical excuse” of the homeowner trying to evade a foreclosure proceeding.

A second picture shows a coffin with a picture of a woman whose eyes have been cut out. A sign on the coffin reads: “Rest in Peace. Crazy Susie.” The reference is to Susan Chana Lask, a lawyer who had filed a class-action suit against Steven J. Baum — and had posted a YouTube video denouncing the firm’s foreclosure practices. “She was a thorn in their side,” said my source.

A third photograph shows a corner of Baum’s office decorated to look like a row of foreclosed homes. Another shows a sign that reads, “Baum Estates” — needless to say, it’s also full of foreclosed houses.

The person who supplied the photos said they reflected the company's attitude. The publicity caused the government's mortgage giants Fannie Mae and Freddie Mac to stop doing business with the firm. That was the kiss of death.

Such a shame.
Posted by Teamster Power at 1:03 PM