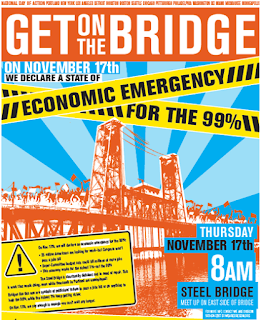 We're hearing that hundreds are marching on Wall Street to protest our corrupt financial system, but only people with corporate IDs are allowed on Broadway (a public thoroughfare). Watch it live here.

Shouting "God Bless America," the protesters are tearing down the barricades surrounding Liberty Park. It's part of the International Day of Action.

Actions are scheduled around the country by unions, faith groups and community groups to show solidarity with the Occupy Wall Street movement. Interfaith Worker Justice, just as an example, will protest wage theft in Houston, Ithaca, New Brunswick, Madison, Fayetteville and San Francisco. Marches to bridges are planned to showcase our crumbling infrastructure and demand that Congress create jobs.

Teamsters are joining the global day of action at Los Angeles and Dallas Airports in solidarity with  Australia's Qantas workers.
According to Twitter traffic, the Teamsters are on the way:

We also learn the Teamsters semi-tractor trailer is in Occupy Portland.


@chadcarterpdx: Crowd growing at the Rose Quarter. Sound of drums in the air & a Teamsters Local 206 semi

@alison_barnwell: A Teamsters truck blocked traffic at NE Oregon and 1st, blasting "Have you been to jail for justice?" #OccupyPortland

Stay tuned.
Posted by Teamster Power at 11:21 AM