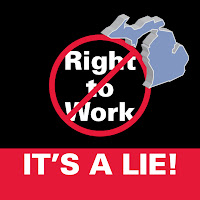 The Michigan House of Representatives voted to pass an anti-worker, pro-poverty, right-to-work-for-less bill just now, as angry citizens outside chanted "Kill the Bill." They were still locked out of the Statehouse though a judge had ordered Michigan Republicans to reopen it. House Democrats walked out in protest. The vote was 58-52.

The court order briefly brought action to a halt in the House until they voted 64-42 vote that the injunction does not apply to the house operations.


An injunction to allow access to the Capitol has been ordered, but people are not being permitted in!! #NoRTWMi”

Not only was the public locked out, there were no committee hearings and no public input. Democratic representatives went outside to join the protesters.

AFP was founded by wealthy industrialists Charles and David Koch. Their business interests in Wisconsin include a branch of their pulp and paper giant Georgia-Pacific, a coal subsidiary, timber plants and a pipeline network.


New disclosures retrieved today, showing some of API’s spending over the course of last year, reveal that API used its membership dues (from the world’s largest oil companies like Chevron and Aramco) to finance several dark money groups airing attack ads in the most recent election cycle.

Now the Legislature has to wait five days before they can take up the bill. It is expected to pass.