Two-hundred-fifty of us drive 12 hours to grant a Christmas wish for a 5-year-old boy with cancer.


Nathan Norman, 5, is battling a rare form of cancer. All he wanted for Christmas was cards from his heroes, so a group of Massachusetts police officers, firefighters and first responders got together to deliver the boy’s present.

Nathan said the holiday cheer from the cards might help him feel better.

“It touches anyone who is a parent. I have two kids. You just feel for a family who is going through something like that,” said Lt. Chris Munger of the Watertown Police Department.

Nathan is battling a rare form of brain and spine cancer. He lives in Virginia, but his wish resonated with hundreds of police officers in New England.

Word got around, and first responders from 80 agencies decided not just to send Nathan cards but to deliver them personally. The officers left in about a hundred cruisers Wednesday morning with cards, pins and t-shirts for Nathan and his siblings.

On Thursday, they arrived in Lynchburg to present gifts to his Nathan and his brothers and sisters. They lined up in formation (as you can see below). The Seekonk Police Department tweeted:


Nathan and his siblings called us to attention, present arms, order arms and....jump on one foot. We obeyed!

You can get a feel for how it all happened on Twitter at the hashtag #Cards4Nathan.

Thanks to our Teamster brother Bill Munger for alerting us to the story. It's his cousin Chris who's quoted in the third paragraph.

And remember, 'THUGGS" stands for "Those Helpful Union Guys and Gals." 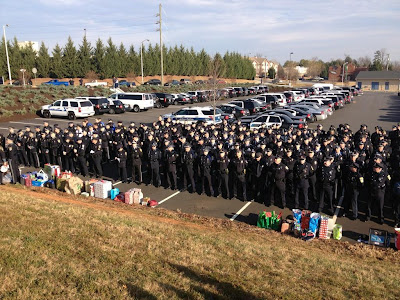