Human trafficking: The year in review (note: it's depressing) 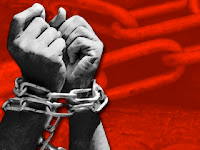 Among the lowlights:
We think these examples may reveal more than failures of the U.S. guestworker program. They show that human slavery is making a comeback, according to The Atlantic.


The highest ratios of slaves worldwide are from South and Southeast Asia, along with China, Russia, and the former satellite states of the Soviet Union. There is a significant slave presence across North Africa and the Middle East, including Lebanon. There is also a major slave trade in Africa. Descent-based slavery persists in Mauritania, where children of slaves are passed on to their slave-holders' children. And the North Korean gulag system, which holds 200,000 people, is essentially a constellation of slave-labor camps. Most of the world's slaves are in sedentary forms of servitude, such as hereditary collateral-debt bondage, but about 20 percent have been unwittingly trafficked by predators through deception and coercion. Human trafficking is often highly mobile and dynamic, leveraging modern communications and logistics in the same basic ways contemporary business does generally. After the earthquake of 2010 devastated Haiti, Hispaniola was quickly overrun with opportunistic traffickers targeting children to sell into forced domestic work or brothels.

Maybe next year will be better...
Posted by Teamster Power at 3:12 PM