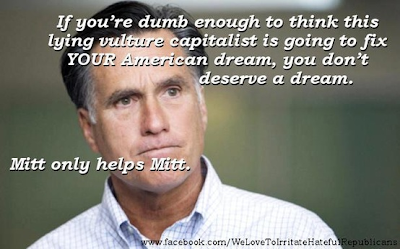 No one should be surprised that a vulture-capitalist-turned-politician would exploit the news organizations covering his campaign.

It looks as if that's exactly what Mitt Romney did.

Nine news organizations signed a letter to the Romney campaign contesting charges forwarded to them for reporters who traveled with the candidate.

Buzzfeed was one of the organizations that signed the letter, which was sent today. Here's what it says, in part:


We’ve dealt with numerous campaigns over the past decades and understand that we pay a premium to travel with a candidate. But recent invoices from your campaign have raised serious questions about the charges you have forwarded to us for travel with Mitt Romney.

We are not quibbling over charter flights or hotel bills. We are focused on what appear to be exorbitant charges for food, filing centers/holds and ground transportation.
Some examples: $745 per person charged for a vice presidential debate viewing party on Oct. 11; $812 charged for a meal and a hold on Oct. 18; $461 for a meal and hold the next day; $345 for food and hold Oct. 30.

These costs far exceed typical expenses on the campaign trail. Also, it was clear to all present that the campaign’s paid staff frequently consumed the food and drinks ostensibly produced for the media. Were any of the costs of these events charged to the campaign itself, to cover the care and feeding of its staff? We would like to see how exactly the costs were determined for any specific event above $200, including the amounts you were charged and to whom you in turn assessed charges.

We have similar concerns about ground transportation costs, which at times exceeded $1,000 a day and were far higher per capita than what the campaign charged during the primaries--despite the larger numbers of reporters, photographers and television crews travelling and dividing the costs. One news organization contacted two of the bus agencies used by the campaign; it was clear from their reporting that the costs you charged us far outdistanced what you paid for the transportation.