Is the Son of Koch Brothers laundering money? 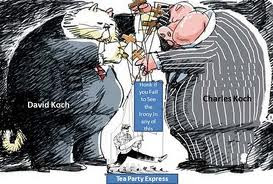 It looks like one of the front groups spawned by the Benedict Arnold Koch brothers has indeed been laundering millions of dollars.

An extremist plutocrat in Illinois named Richard Stephenson apparently gave $12 million to FreedomWorks (the Son of Koch Brothers) during the fall of 2012. Only the story at the time was that the money came from two newly formed companies owned by a Tennesseean named William S. Rose III.


Over six weeks that began in late September, using two newly formed companies with no other apparent purpose, Rose gave more than $12 million to FreedomWorks. The donations made Rose’s companies among the biggest corporate donors of the election cycle. In response to the press interest over his motivations, Rose released a six-page statement, denying that he or his companies were “shadowy” but insisting that the business of one of the companies, Specialty Group, was a “family secret” that would be kept secret “as allowed by applicable law — for at least another 50 years.”

The (Washington) Post’s story this week reported that the money given by Rose’s companies actually came from Richard Stephenson, a “reclusive Illinois millionaire” and the founder and chairman of the board of the for-profit Cancer Treatment Centers of America.

Here's the Koch connection: In 2004, FreedomWorks was spun off "Citizens for a Sound Economy," one of the Koch brothers' political machines. There was another spin-off called  "Americans for Prosperity." (Though the brothers sold oil equipment to Iran, they probably thought "Americans for Iranian Prosperity" wouldn't look good. Oh, and btw, their father made the fortune they inherited by doing business with Josef Stalin. You can look it up.)

FreedomWorks made the news this week because former House Majority Leader Dick Armey tried -- and failed -- to take control of FreedomWorks. (The Washington Post reports the hilarious details here.) Stephenson agreed to pay $400,000 for 20 years to keep Armey away from FreedomWorks.

But about that $12 million donation: You just can't lie about contributing money toa SuperPAC.


Just last week, two watchdog groups, Democracy 21 and the Campaign Legal Center, filed complaints with the Federal Election Commission and the Department of Justice over the $12 million that came from Rose’s companies.