(UPDATES to ADD photo of India, link to photos in final graf.)

Hundreds of Brazilian union members are marching in solidarity through the streets of Sao Paolo. Their brothers and sisters in the United Kingdom are delivering a giant letter demanding change at the head office of ASDA, which is owned by Wal-Mart.

In Washington, D.C., a crowd of people supporting Wal-Mart workers gathered outside the retailer's federal lobbying offices. They demanded an end to factory death traps. More than 100 people died in Bangladesh on Nov. 24 when a fire broke out in a factory that made apparel for Wal-Mart. The protesters delivered 200,000 signatures on a petition asking Wal-Mart ensure safe working conditions in its supply chain.

Josh Eidelson at The Nation writes,


In partnership with the global union federation UNI, the union-affiliated group Making Change at Walmart is supporting a “Global Day of Action,” with participation expected from Walmart workers in Argentina, Brazil, Canada, Chile, India, Nicaragua, South Africa, the United Kingdom and Zambia. The day’s main US protest will be a Miami demonstration featuring a street theater performance in the tradition of the United Farm Workers’ teatro campesino...

Friday’s planned actions make good on a promise made two months ago. ... as Southern California workers launched the first-ever coordinated US Walmart retail strikes on October 4, UNI staff and Walmart workers from abroad were in town to kick off a new Walmart Global Union Alliance. Workers from the UNI delegation rallied with strikers and escorted them back into work after the strike, carrying their countries’ flags into Walmart stores. They also pledged coordinated global actions in the months ahead.


At the protests across the globe, workers are holding a moment of silence to honour the victims of the factory fire in Bangladesh that tragically claimed the lives of 112 workers. According to the New York Times, reports show that Walmart “played a leading role in blocking an effort” to have global retailers pay more for apparel to help Bangladesh factories improve their electrical and fire safety.”

According to UNI Global, protests in other countries include demonstrations at company stores and its headquarters in Argentina;  a march by Walmart unions through Santiago, Chile; protests across India; handbilling outside stores throughoutt Nicaragua; and demonstrations outside several Massmart stores in South Africa.

The Wal-Mart protests are succeeding at least in raising awareness of the company's mistreatment of its workers. Earlier this week, a Tucson food bank refused a $1,000 donation from Wal-Mart, which just opened a store there. CNN reports what happened:


...the Arizona charity said Tuesday that their snub netted much more than what Wal-Mart had offered after an outpouring of local donations came from those concerned about the store's effect on union jobs and small businesses.

Below is a photo of workers in Orissa, India, rallying in solidarity with Wal-Mart workers. See more photos from the protests around the world here. 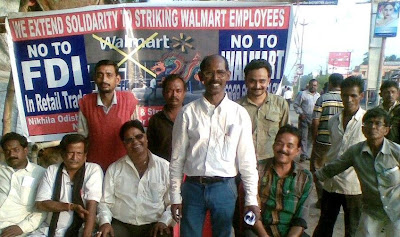