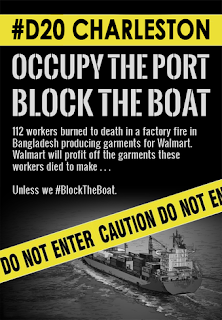 Well, they refused for about two hours in Charleston, S.C., today. The ship carried Wal-Mart-bound cargo from the Bangladesh factory that burned last month, killing 112 workers.


Longshoremen refused to unload a ship on Thursday morning for more than an hour in a show of solidarity with workers in Bangladesh who labor in dangerous sweatshops for pennies an hour, a spokesman said.

“It’s the cargo on the ship. We’ve got a concern about workers around the world,” said Leonard Riley of International Longshoreman’s Association 1422.

After the protest, the dock workers said they would return to their jobs and unload the Carolina Maersk...


The Tazreen Fashions factory in Bangladesh’s capital city of Dhaka, which makes many clothing items sold by the discount department store, caught fire on Nov. 24...

Not only is this shipment of its products an insult to the workers who died in that fire, says the protest organizer, but it furthers damage to the American economy and employment, too.

While Wal-Mart is the nation’s largest employer and clears over $15 billion in annual net profit, 80 percent of its workers qualify for food stamps due to low pay.

The annual cost of government benefits to these workers, who are paid an average of only $8.81 an hour, comes to $2.66 billion, according to Good Jobs First.

Wal-Mart’s use of foreign-made products is responsible for the loss of 196,000 American jobs, says the Economic Policy Institute, and the corporation is also responsible for 11 percent of the total trade deficit with China.

Misclassified port truck drivers are also a casualty of Wal-Mart's relentless drive to lower costs along the supply chain. The Teamsters have long sought to improve wages and working conditions for port drivers.
Posted by Teamster Power at 5:09 PM