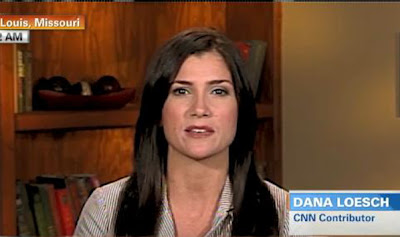 Loesch went to work for Big Journalism after riding her wave of bile to national celebrity, if you could call it that. (There's a whole blog devoted to Loesch, Dana Busted, that calls her "St. Louis's most embarrassing liar." Lately she's been attacking workers who protested RTW4Less in Michigan and supporting the new anti-worker laws.)

Loesch was surprised to discover that the anti-worker website doesn't treat its workers well. So she sued. The St. Louis Post Dispatch reports,

Conservative talk radio host and commentator Dana Loesch sued the owner of the conservative website Breitbart.com Friday, claiming that although her relationship with the news and opinion aggregating website had gone “tragically awry,” Breibart.cοm LLC refused to let her work for the company or anyone else, forcing her into “indentured servitude in limbo.”

The suit, filed in U.S. District Court here, seeks at least $75,000 in damages, as well as a judge's declaration that her contract had expired.

The suit says that difficulties managing the Breitbart “media 'empire'” or ideological conflicts or both had spiked the working relationship, creating a “increasingly hostile” work environment. When Loesch tried to terminate her work agreement in September, Breitbart refused and extended the agreement by a year, the suit says.