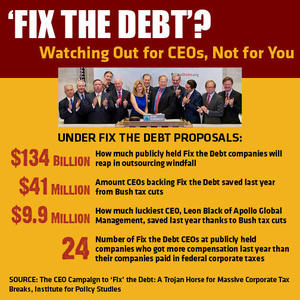 We know. You're shocked, shocked to hear that CEOs can say one thing and do quite another. But James Kwak at The Baseline Scenario draws our attention to an especially egregious bit of hypocrisy.

You'll recall that CEOs formed a group called "Fix the Debt," which is a euphemism for "Steal More Money From the Middle Class." They're lobbying Congress to cut Social Security, Medicare and Medicaid so they can still get their government contracts and tax breaks for the rich.

Many of these CEOs pushing for Social Security cuts work for companies that underfunded their own pension plans.


Of the CEOs in Fix the Debt, 71 lead public companies; of those, 41 have employee pension funds. Of those, only two pensions are fully funded; the other pensions are underfunded by an average of $2.5 billion, according to the Institute for Policy Studies.

More generally, according to the same source (see full report), S&P 500 companies’ pensions are only 72 percent funded. Social Security, by contrast, will pay full benefits for the next twenty-some years, and will pay about 75 percent of scheduled benefits thereafter even if nothing is changed. And those company pension funds benefit from the lax standards of private pension accounting, which allow them to assume optimistic rates of return. Social Security’s funding estimates have much less risk because it is paid for by interest on Treasury bonds and by payroll taxes, which are much less volatile than the stock market.