Protests today against Wal-Mart, cuts to Social Security and Medicare

Today workers rallied in Washington to keep cuts to Medicare and Social Security out of the year-end budget deal while activists tried to block a ship carrying Wal-Mart goods from Bangladesh to the Port of New Jersey.

"Jobs not cuts" was the message delivered by hundreds of union supporters and community activists gathered on Capitol Hill this morning. Some traveled from as far as Wisconsin and New York. 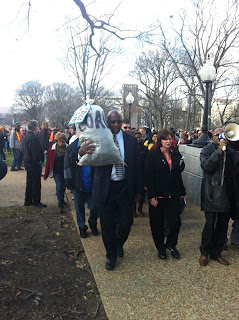 They marched across the Hill and into congressional offices to sing carols about saving Social Security and Medicare. They also delivered a big bag of coal to House Speaker John Boehner, who wants to raise the Medicare eligibility age and cut Social Security benefits.

House staff opened the windows of their office buildings to hear the chants as activists marched across the Hill.  Acrtivists from New York went to Republican Rep. Richard Hanna's office to sing carols but were told he wasn't in. And Wisconsin Jobs Now tells us activists paid a visit to Sen. Herb Kohl's office in Milwaukee to echo demands being made in Washington today.

At the Port of Newark, activists tried to block the delivery of goods to Walmart that originate from a Bangladeshi factory where 112 workers burned to death. The workers were making garments at slave wages so Walmart could profit by underselling local businesses. Protesters are chanting: "block-the-boat, shut-it-down, turn-walmart's-smile, upside-down!"

Josh Eidelson writes at The Nation:


About sixty activists gathered early this morning outside the Port of Newark to protest the arrival of a ship they said carried Walmart goods from Bangladesh. Hoisting cardboard tombstones spelling out Walmart’s name, and garments emblazoned with the names of workers who died in the New York City Triangle Shirtwaist Factory Fire, the crowd declared the retail giant culpable for the deaths of 112 workers in a similar fire last month in Bangladesh. Chants included, “One, two three four, don’t let that boat come ashore! Five, six, seven, eight, don’t touch that shit, don’t move that freight!”

“The supply chain needs to change…” Alliance for a Greater New York (ALIGN) organizer Martiza Silva-Farrell told the crowd. “This is a start.”

Activists said they originally gathered closer to the dock in hopes of more directly confronting the incoming ship and convincing some dock workers to refuse to unload its goods, but agreed—after police threatened arrests—to move to a space along a nearby highway. While some had expected that the action, promoted as “Block the Boat,” would include civil disobedience, it ended around 9 am without arrests.

Another day, another two battles in the War on Workers.
Posted by Teamster Power at 3:38 PM