What real people really say about unions (Hint: UNION 4 EVER) 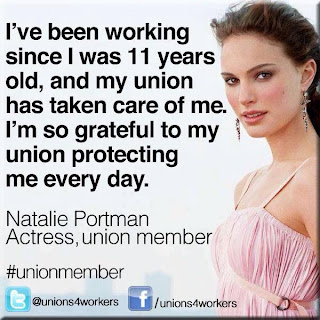 We've heard enough anti-union, anti-worker crap from extremist billionaires who want to turn American workers into feudal serfs. So we thought it would be instructive to see what real union members say about their unions.

Here's a sample of the comments we copied on the Teamsters Facebook page. They're unsolicited. And we see them all the time:


I like to thank The Teamsters for a great Life. Look at all them years. And always had a Teamsters job.


I enrolled in the Teamsters Driving Program in 1983. I'm now retired with a nice pension and medical insurance. Thank You Teamsters!


My sisters and I were raised by the Teamsters. You'll never hear a bad word about them from us. They truly are a brotherhood.


I'm a recent retiree after 34 years of being a Teamster . I was able to retire at age 56, thanks to my Contract negotiated by the defenders of the middle class.
THE TEAMSTER UNION


The Teamster pay scale, keeps the non union pay scale competative. With out it, how much do you think you'd be making? The contract give's everything in Black & White, respect and rights, I worked for non union carriers, where I had no rights. If you're written up for something or fired, who do you appeal to, the company that wrote or fired you?


Come on......Unions especially Teamsters fought for my single mother Dana Marie SCHWANZ in the seventies and eighties..,.AND SHE STILL STRONG WITH WORKERS RIGHTS WITHOUT HER UNION.....TEAMSTERS AND UNIONS HAVE TRUE!!!!VALUE!!!! IN THE LOWER AND MIDDLE. CLASS....Take it from me.I...WAS RAISED IN A COMFORTABLE CHILDHOOD THANKS TO TEAMSTERS SUPPORTING MY MOTHER'S RIGHTS


ya gotta love being a TEAMSTER...

Posted by Teamster Power at 9:16 AM