How the Kochs bought Michigan lawmakers 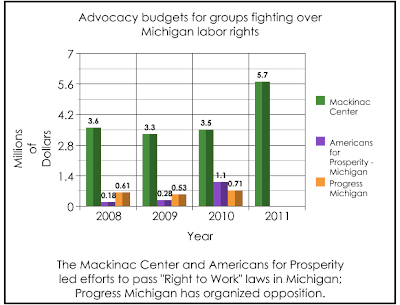 Actually, the Benedict Arnold Koch brothers aren't the only un-American billionaires to buy radical Republicans in Michigan. Ponzi scheme Amway heir Dick DeVos spent big to get himself the right to lower workers' wages by $1,500 a year.

Let's be clear: Gov. Rick Snyder and the Republicans railroading the right-to-work-for-less bill through the Legislature know it's bad for workers. They know it will lower wages and increase poverty. And they know most people know that. That's why they spent two years lying about their intentions.  They were too spineless to tell the voters what they intended to do.

The spines of these cowardly Republicans were stiffened by the largesse of the Kochs, DeVos and other politically active billionaires. The plutocrats spent $18 million over the past four years to create protective cover for Republicans to attack workers.

They did it by setting up front groups with deceptive names. They paid for sophisticated market research. They sprinkled fairy dust like "freedom" and "choice" around their attacks on workers. They created a smoke-and-fog machine to promote the misnamed "right to work," which conveys no rights and provides no work.

The chart above shows the sad mismatch between the money spent by the un-American billionaires to fight unions (purple and green) and the amount spent to support them (yellow). The Mackinac Center (green) receives considerable support from DeVos. The Koch brothers fund Americans for Prosperity (purple).  They also support the nefarious ALEC, which drafted large sections of the right-to-work bill.

Lee Fang at The Nation explains,


These organizations are part of a more aggressive political force that is adept at controlling the twenty-four-hour news cycle and managing coalitions. Unlike ordinary business lobbies that simply support right-to-work, these advocacy groups go out and shape public opinion through broad messaging and content development, which in turn is used for organizing around policies.

Fang points out that a DeVos lackey founded a group last month that paid for a $1 million television and radio campaign to promote right-to-work-for-less. The ads were launched on the very day Snyder announced his "reversal" on the legislation. Meanwhile several business lobby groups regurgitated the Mackinac Center's propaganda.


The Mackinac Center is a right-wing think tank in Michigan that produces pro-Right to Work reports, sponsors a pro-Right to Work legal foundation, and produces an array of other content, from a Pininterest page to short videos. The Center has gone on a media tour, touting Snyder's move this week on CNN, Fox Business, and much of the Michigan press. Notably, the group recently started two of its own media outlets, Michigan Capitol Confidential and Watchdog Wire Michigan.

Americans for Prosperity - Michigan, the group founded by the billionaire Koch brothers, has a relatively new chapter in Michigan that has produced pamphlets extolling anti-Right to Work reforms. This week, the group set up a heated tent outside the capital to support Snyder's law and bused activists to Lansing to counter labor protesters.

Once the deed is done, Republicans can expect lavish vacations from ALEC. They'll get hefty corporate donations for their re-election campaigns. When they retire, or if the voters boot them, they're quite likely to land a lucrative gig working for the Mackinac Institute or some Koch-funded propaganda think tank.

Nice work if you can get it. The rest of us, of course, are just screwed.
Posted by Teamster Power at 4:46 PM