WI Teamsters in the field for today's victory

Teamsters are already up and at 'em in Wisconsin after a long night of calling members to tell them to vote.

Our brothers from Local 200 are standing at an overpass holding signs and flags to remind commuters to get to the polls. Wisconsinites can vote from 7 a.m. to 8 p.m. The get-out-the-vote effort has been extraordinary.

We Are Wisconsin has 39 field offices with a team that’s trained its eyes on bringing voters to the polls. In the first 48 hours of the program, We Are Wisconsin knocked on 727,411 doors. By the time the polls close they will exceed their goal of knocking 1.4 million doo.  In terms of phone calls, We Are Wisconsin exceeded 550,000 dials as of Monday morning and will make between 1.8 and 2 million dials by the end of the day tomorrow. 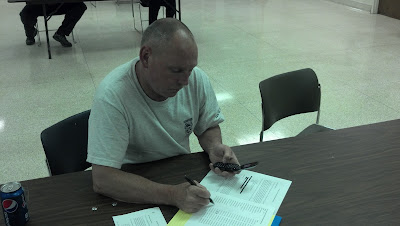 Teamsters did their part last night. Here's a photo of  Local 200 member and Roundy’s Warehouse  employee Fred Steinbach calling members to get out and vote.

We'll have more photos as the day goes on. We can win this thing!

Posted by Teamster Power at 7:28 AM