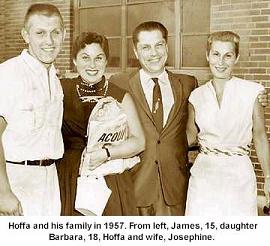 How many doctors, lawyers and hedge-fund managers got where they are today because their parents had good union jobs? Probably a lot.
How many understand their parents made a better life for their kids than they had because of unions? Probably not a lot.
Todd Farally, a third-generation union sheet-metal worker, makes that point in a Daily Kos diary:


...many (oh so many) have turned on the same sort of people that bore and raised them, clothed and fed them, put them through college and called them son or daughter.

How do we end the cycle? Here's his suggestion for today's union parents:


Do we tell our children about what we do? Do we educate them on the struggles of those who have come before us? Those who had endured, bled and sometimes died so that the generations to come could have a better life than their parents had. Sadly, I don’t think so.

Many parents back in the seventies and eighties probably never thought there would be attacks on the people that build our country, that teach our children, or even those that protect us while we sleep. And that was our first mistake. Never underestimate the greed of those that have no conscience. Never think for a second that people won’t watch you suffer while they profit.

Something else that has put us in this predicament is that some of us in skilled labor put down our professions, expressing horror at the thought of our children following in our footsteps. This happens more often than we might want to admit and it has lasting consequences. We act as though working with our hands is something to be ashamed of, that it’s something to look down on. And we’re ok with that? I’m certainly not and you shouldn’t be either.

The whole thing is well worth a read. You can find it here.
Posted by Teamster Power at 11:17 AM