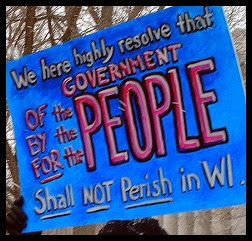 Turnout is so heavy in today's recall election that Milwaukee poll workers ran out of ballots and Dane County's clerk said as many as 88 percent of the county's voters could cast ballots today.

Milwaukee and Dane County are expected to vote heavily for Mayor Tom Barrett.

We knew turnout would be good in Wisconsin today, but had no idea it would be this good. High turnout is considered an advantage for Barrett.

The phone banking has been amazing, according to our friends at We Are Wisconsin. In 25 minutes phone bankers made 765 calls per minute. This means in less than a half hour, volunteers made 23,000 calls.

While there's no specific number on what turnout is looking like yet in the city of Milwaukee, Election Commission Executive Director Susan Edman says the turnout looks more like 2008 than it does 2010.

"It's been much higher than 2010," Edman said. "We've had long lines at all of the polling places. This might be more along the lines of 2008 when it comes to turnout."

Edman also said that city staff are being recruited to help out polling locations and that some wards have called saying they're running out of voter registration forms and ballots.

And our favorite tweet of the day from our good friend bluecheddar:


Liking the sound of this "@PeterHambyCNN: Nervous Republicans everywhere #WIrecall"

Posted by Teamster Power at 5:08 PM