Rally to protest TPP on July 2 in California 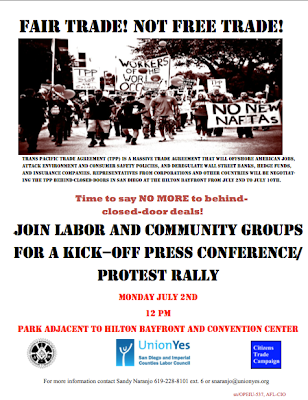 You'd think the U.S. Trade Representative would back off the latest corporate giveaway TPP by now. After all, the trade deal with South Korea took effect in March, and by April our trade deficit with South Korea tripled!


What do these mammoth and mounting deficits mean? A deepening dependence on foreign nations for the necessities of our national life. A steady erosion of our manufacturing base. A continued stagnation in the real wages of the middle class. And an unending redistribution of America's wealth to foreign lands.

Critics warned the TPP could be even bigger than NAFTA because more countries can join the agreement. Sure enough, the U.S. on Monday announced Mexico would be allowed to join. Reports Reuters:


The United States and eight other countries on Monday welcomed Mexico into talks aimed at reaching an Asia Pacific free trade agreement, but continued to mull over Canada and Japan's seven-month-old bids to join the negotiations.

"We are delighted to invite Mexico, our neighbor and second-largest export market, to join the (Trans-Pacific Partnership) TPP negotiations," U.S. Trade Representative Ron Kirk said in a statement after a meeting between U.S. President Barack Obama and Mexican President Felipe Calderon at the Group of 20 leading economies summit in Los Cabos, Mexico.

So mark your calendars for July 2 if you'll be anywhere near San Diego that day.
Posted by Teamster Power at 2:18 PM