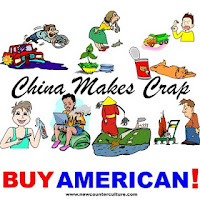 Here's an American hero for you: Master Sgt. Steve Adachi exchanged his China-made combat boots with boots made in America.

Adachi, a reservist deployed to Kabul, Afghanistan, was issued a standard pair of boots while at his home unit in Hawaii.

According to the Air Force Times,


...they were made in China. He tried to exchange them at the Joint Base Pearl Harbor-Hickam clothing store, but he was in store for another surprise.

“I was told that the boots were not compliant with the Berry Amendment and I could not exchange them,” Adachi said.

The Berry Amendment requires the food, clothing, fabrics and other textiles the Pentagon buys to be grown or made in the U.S.

“I went back to the reserves supply warehouse and asked the supply manager why I was issued Chinese-made boots,” Adachi said. “He told me that they were less expensive as opposed to the U.S.-made ones. I urged him to reissue me U.S. boots, citing that I did not feel comfortable ‘going to war’ wearing boots made in China.”

In the end, he got a pair of U.S.-made boots, which he exchanged for American boots in his size. But when he arrived in Afghanistan, he was issued a pair of boots made in China.

We're wondering what happened to what the manufacture this blog calls,


...the United States Army’s proud tradition of providing soldiers with high quality American-made uniforms. As outlined in the Berry Amendment of 1941, the “Department of Defense [must] give preference in procurement to domestically produced, manufactured, or home grown products, most notably food, clothing, fabrics, and specialty metals.”