California to vote on 'Special Exemption' for corporations 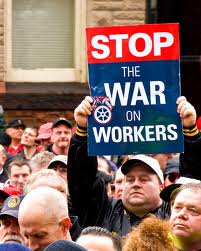 The war on workers will resume in November, and we're not just talking about Mitt Romney.

California's One Percenters put a measure on the ballot that would stop unions from spending money on political campaigns but -- you guessed it -- corporations wouldn't be affected. It's called the "Stop Special Interest Money Now Act."


This may come as a shock, but the "Stop Special Interest Money Now Act" won't do anything of the kind – at least not in any way that is balanced. It certainly won't prevent one-percenters from getting their two cents in, or their $2 million.

The initiative is the brainchild of Orange County Republicans, was written by a partner in the law firm that represents the California Republican Party, and is being bankrolled by wealthy Republicans.


...While it claims to be about “stopping special interests” the measure actually gives special exemptions to corporate special interests and Super PACs. It would do nothing to fix what’s broken in Sacramento. Instead, it would give even more power to the wealthy and well-connected to influence elections, control government and weaken our state’s middle class.

The millionaire backers misleadingly call it “The Stop Special Interest Money Now Act,” claiming it would rein in campaign contributions by both unions and corporations. In fact, the deceptive wording of the initiative specifically limits the voice of union members like our local teachers and nurses and the firefighters and police that keep us safe.

This one-sided measure would make our system even more imbalanced and it does nothing to stop the flow of money from the wealthy in politics.

Follow this attempt to cripple unions on a new radio talk show for trade unionists, United Trades Radio. It will broadcast live this summer from Long Beach, Calif. Learn more at United Trades Radio Facebook page.
Posted by Teamster Power at 11:55 AM