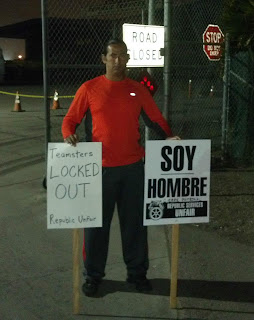 Members of Local 396 at Republic honored the picket at a facility in Long Beach, in solidarity with our brothers and sisters in Evansville, Ind.

The 80 Republic Teamsters at Local 215, locked out since May 8, have also been supported by  Teamsters at a transfer station in Richmond. They honored pickets set up on June 1. Teamsters in Milpitas, Calif., also refused to cross their picket line extension on Monday.

Republic obviously doesn't understand the power of Teamster solidarity yet.  You'd think they'd get it after picket line extensions went up for striking Alabama Teamsters at Republic in March. They had 400 Teamsters at their backs in Columbus, Ohio, Buffalo, N.Y., and Seattle. The Alabama workers ratified a contract and returned to work a week later.