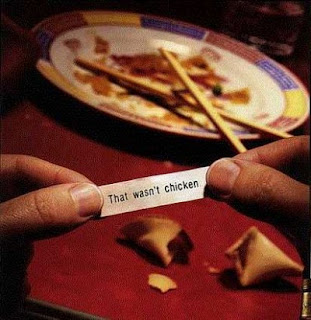 Food from China is dangerous and disgusting. Which is why it's so important that we know where our food comes from. Which is why we have COOL -- country of origin labeling -- on our food.

The International Herald Tribune has the latest on China's food safety:


There’s mercury in the baby formula. Cabbages are sprayed with formaldehyde. Gelatin capsules for pills, tens of millions of them, are laced with chromium. Used cooking oil is scooped out of gutters for recycling, right along with the sewage.

Accounts of dubious or unsafe food in China are as mesmerizing as they are disturbing — “artificial green peas,” grilled kebabs made from cat meat, contaminated chives, chlorine showing up in soft drinks.

There have been stories of imitation soy sauce made from hair clippings, ink and paraffin being used to dress up cheap noodles, and pork buns so loaded with bacteria that they glow in the dark.

A new investigation by the Chinese magazine Caixin has found that “these publicized food safety scandals represent only a fraction of unsafe food production practices. Hundreds of chemical food additives are pumped into products that Chinese people consume every day.”

Things are so bad that a new iPhone app was recently launched to track food scandals nationwide. The app, which sends out daily updates on the latest outrages, was reportedly downloaded more than 200,000 times in the first week.

Americans are eating more and more food from China. According to food & water watch,


China has become an agricultural powerhouse and leading food exporter. Though supermarket labels may not always indicate it, a growing portion of the American diet is now made in China. In 2009, 70 percent of the apple juice, 43 percent of the processed mushrooms, 22 percent of the frozen spinach and 78 percent of the tilapia Americans ate came from China.


The World Trade Organization’s (WTO) ruling today against another highly popular U.S. consumer policy – country-of-origin labeling (COOL) for meat cuts and products – will only intensify public opposition to more of the same backwards trade pacts, Public Citizen said. A panel report released today announced that Mexico and Canada have succeeded in their WTO attack on the labeling rule; today’s WTO ruling is the third this year against popular U.S. consumer or environmental measures.

“Today’s ruling makes very clear that these so-called ‘trade’ pacts have little to do with trade between countries and a lot to do with our major agribusiness corporations being free to sell mystery meat in the United States, with neither consumers nor our elected representatives in Congress able to ensure its safety, much less even know where it is from,” said Lori Wallach, director of Public Citizen’s Global Trade Watch.

After 50 years of state efforts to institute COOL for meats, and federal experimentation with voluntary COOL for meat, Congress passed a mandatory COOL program as part of the 2008 farm bill. In their successful WTO challenge, Mexico and Canada argued that the mandatory program violated the limits that the WTO sets on what sorts of product-related “technical regulations” WTO signatory countries are permitted to apply. In their filings to the WTO, Canada and Mexico suggested that the U.S. should drop its mandatory labels in favor of a return to voluntary COOL, or to standards suggested by the Codex Alimentarius, which is an international food standards body at which numerous international food companies play a central role. Neither option would ensure that U.S. consumers are guaranteed the same level of information as the current U.S. labels.

Maybe it's just time to go back to the land.
Posted by Teamster Power at 11:57 AM