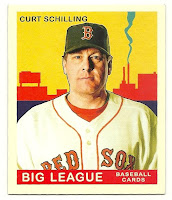 A small-government multimillionaire -- who happens to be a Boston Red Sox legend -- is soaking Rhode Island taxpayers for tens of millions of dollars.

It wasn't his fault, though, according to an interview with the Christian Science Monitor:


Former Boston Red Sox pitcher Curt Schilling said Friday that the collapse of his 38 Studios video game company has probably cost him his entire baseball fortune, and he placed part of the blame on Rhode Island officials, including Gov. Lincoln Chafee.

Schilling sounds a lot like people who blame government workers for government budget shortfalls. But corporate giveaways are a big part of the problem.

Here's a typical example of blaming workers from a Bloomberg story about North Las Vegas:


The city’s travails mirror those of municipalities across the nation including Detroit; Providence, Rhode Island; and Stockton, California. They have struggled to contend with the costs of workers’ retirements and health care as the national economy fell into the longest recession since the 1930s, revenue flagged and population dwindled.

Nearly all the media coverage of the bankruptcy of Stockton, Calif., focuses on pension and health care costs. But The Motley Fool points to corporate giveaways as well:


According to Standard & Poor's, 52% of the city's budget already goes to paying the local constabulary, and another 30% more to paying firefighters. But the balance must cover everything from maintenance and street lights to paying off debts rung up during the boom.

A minor league baseball stadium that was originally seen as costing $20 million.

$22.4 million to build a marina (which was supposed to pay for itself, but actually consumes $700,000 in city subsidies annually).

$63 million for a new hockey arena.

Perhaps Rhode Island, like Stockton, thought a corporate giveaway would solve its high unemployment problem, now at 11 percent. So perhaps that's why Rhode Island listened when Shilling came to them with his proposal. In exchange for $75 million in loan guarantees, he'd move 38 Studios, his fledgling video game company, to the state and create 450 jobs.

The state should have been forewarned that Shilling isn't the brightest bulb in the marquee of life. Soon after  he won Game 6 of the 2004 World Series (with a bleeding ankle, no less), he jeopardized his hero status in deep blue Massachusetts by campaigning for George W. Bush. Schilling explained he was for "small government," misunderstanding that Bush dramatically increased government during his presidency.

Now if only he can figure out how to blame government workers. Oh wait, he did:


...he said public comments made by Chafee last month questioning the firm's solvency were harmful as the firm tried — but failed — to raise private capital to stay afloat.