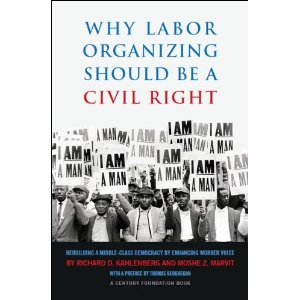 Let's face it: Current labor law doesn't protect workers much against employer abuse. But why shouldn't all workers have the same rights as those protected because of their race, religion, sex or national origin?

That's the argument made by two authors who've written a book, “Why Labor Organizing Should Be a Civil Right: Rebuilding a Middle-Class Democracy by Enhancing Worker Voice.” The authors, Richard Kahlenberg and Moshe Marvit, explained their argument in a New York Times op-ed in March:


While there are many factors that help explain why the nation has progressed on (Dr. Martin Luther) King’s vision for civil rights while it has moved backward on his goal of economic equality, among the most important is the substantial difference between the strength of our laws on civil rights and labor. It is time to write protections for labor into the Civil Rights Act itself.

Amending The Civil Rights Act of 1964 would strengthen penalties and procedures against employers who abuse workers who try to organize. Kahlenberg and Marvit explain:


Under our proposal, complaints about wrongful terminations for union organizing could still go through the National Labor Relations Board, which has expertise in this field. But the board would employ the procedures currently used by the Equal Employment Opportunity Commission, which provide that after 180 days, a plaintiff can move his or her case from the administrative agency to federal court. There, plaintiffs alleging that they were unfairly dismissed for trying to organize could sue for compensatory and punitive damages and lawyers’ fees, have the opportunity to engage in pretrial legal discovery and have access to a jury — none of which are available under current law.

There's a petition going around that demands the Democratic Party support such an amendment to the Civil Rights Act. It says:


THEREFORE BE IT RESOLVED: That the Democratic Party show its support for working men and women by officially adopting into its legislative priorities for the next Congress legislation to officially recognize as a civil right the right to join or organize a union. This legislation would provide anti discrimination protection to workers trying to organize a union akin to those provided under Title VII of the Civil Rights Act to protect against discrimination based on race, sex, religion, and national origin. This change would give workers real rights and remedies in exercising their right to have a voice the workplace, would diminish employers’ violation of currently weak labor laws, and would finally recognize what most Americans already believe: It is an individual’s civil right to join or organize a union, and they should not be fired for exercising that right.