Please welcome our 165 new brothers and sisters, drivers and monitors for the Dorchester County School District 2 in Summerville, S.C. They voted Friday to join Teamsters Local 509 in Cayce for respect and fair treatment in the workplace.

The bus workers endured a vicious campaign of fear, division and intimidation by their employer, Durham School Services, a union-unfriendly company owned by National Express Group of Birmingham, England. Unfair labor practice charges have been charged against the company.

The Summerville bus workers were helped by Durham Teamster members from Beaufort and Charleston, S.C. They were supported by political leaders, including Rep. David J. Mack, III, (D-District 109), who came out to the yard.  Mack said,


I have always supported workers being able to organize in order to get the quality of life, pay and benefits that they deserve. I am very interested in Durham sitting at the table to negotiate to improve working conditions. 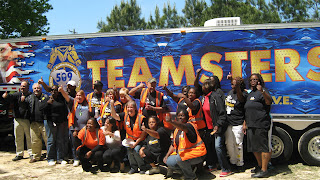 Annette Hill, a driver, said the organizing victory is the start of a new beginning for all 165 workers:


Everyone is excited and glad that this victory belongs to us. I voted Teamsters because I want us to have respect.

Roger Sherman, a monitor, said workers need to be treated fairly and as adults.


I enjoy the kids and the people I work with, but morale here is in the basement. I supported forming our union so we can have fairness and respect.

Since the Drive Up Standards campaign began to improve safety, service and working conditions, more than 34,000 bus workers have become Teamsters.
Posted by Teamster Power at 2:43 PM