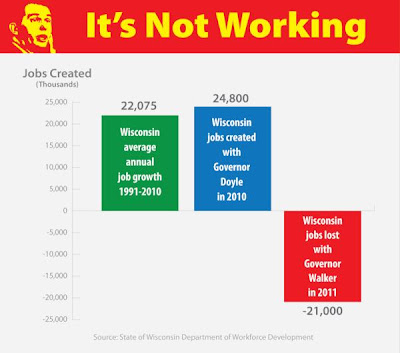 For all those who think government doesn't create jobs, we bring you Wisconsin. Frequent liar Gov. Scott Walker claims his "reforms" are working. As the chart shows, his savage job cutting is killing Wisconsin's economy.

Oh, and lookee here, a slowdown in government spending is hurting the national economy. According to the Miami Herald,


The U.S. economy expanded at a sluggish 2.2 percent annual rate from January through March, the government said Friday in a confounding report that spotlighted the continuing challenge of spurring strong growth.

Most forecasters had expected growth in the 2.5 to 3 percent range. The disappointing first-quarter number mirrored the closely watched March jobs report earlier this month, which also fell short by adding only 120,000 jobs after a string of stronger months.

Although the headline number for the nation's gross domestic product - the sum of goods and services produced in the U.S. economy - came up short of expectations, the report's component parts offered rays of hope. They showed consumption remaining strong in a recovering private sector, while a slowdown in government spending dampened overall growth.

And don't forget what government austerity is doing to Europe (short answer: destroying its economy).