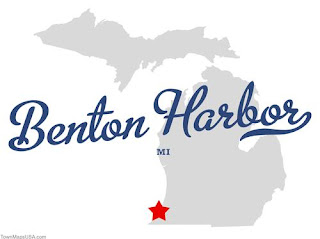 This is just charming. Michigan's financial dictator emergency financial manager law is letting Whirlpool to steal water from the citizens of Benton Harbor. That law -- which opponents may put on the ballot for a citizens' veto in November -- allowed the governor to strip Benton Harbor citizens of their democratic rights. This is just the latest outrage, cross posted from BANCO:


It looks like Whirlpool's Harbor Shores organization has behaved again with incredible irresponsibility and arrogance. The extraordinary control that the Whirlpool Corporation has taken over the community of Benton Harbor, Michigan must have emboldened them to believe they could act with impunity. Three years ago, Harbor Shores tapped into the municipal water supply of Benton Harbor to irrigate their developing Jack Nicklaus Signature golf course.

It is difficult to imagine how the excavation necessary to accomplish this could be done secretly. On the other hand, with so much land destruction and development happening, maybe it was easy to conceal. Somehow, Harbor Shores drew on this water without paying the city, although the residents of BH were metered and paying for water usage. This was happening while the city was bankrupt, and was being run by a despotic emergency manager, Joseph Harris, who answers only to Gov. Rick Snyder.

About a year after this tap-in began, a water main break necessitated excavations for repairs, and the Harbor Shores splice was discovered. (Water discoloration which forced BH residents to boil their water and many to notify local gov. forced the hiring of a company to come in to do the repair work.)

Back payment for a year of heavy water usage was sought. Harbor Shores responded by drawing irrigation water directly from the Paw Paw River. The audacious Marcus Robinson admitted in a meeting that "they" bought a pump.

Over the past two years, water rates for a typical household in Benton Harbor have burgeoned from $30/mo. to more than $100/mo. Apparently, the emergency mgr. has decreed that the water distribution deficit resulting from Harbor Shore's pilferage would be paid for by BH residents.

It's almost unthinkable what the corporation has put this town through in the past decades. Whirlpool Watch believes that the Whirlpool Corp. financed the recent separation of Benton Township from Benton Harbor in order to further destroy BH. BT now has it's own water system. Water provided the second largest source of income for BH, next to property taxes.