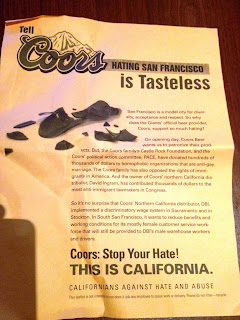 They were also given free rosters by Teamsters from four local unions and Joint Council 7 at the game, the Giants home opener. Their mission: raise awareness about Coors' anti-gay, anti-immigrant policies -- as well as anti-immigrant behavior and worker abuses by the company's distributor in Northern California, DBI Beverage.


The Teamsters, from Local Unions 150, 439, 853 and 856, carried banners and distributed leaflets that read “Tell Coors Hating San Francisco is Tasteless,” and “Tell Coors: Stop Your Hating. This is California.” 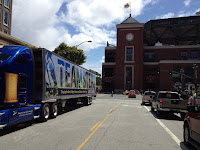 “Coors has a long history of funding anti-gay rights and anti-immigrant organizations and politicians,” said Jim Tobin, President of Local 150 in Sacramento. “Coors also funds groups that are anti-worker and promote laws that would suppress minority voting. So it’s not surprising that David Ingram, who owns DBI, also donates to anti-immigrant organizations and has discriminatory practices in the workplace.”

DBI Beverage earns $250 million in annual revenue, yet in South San Francisco it wants to reduce benefits and working conditions for its mostly female customer service workforce that will still be provided to DBI’s male warehouse workers and drivers.

DBI also implemented a discriminatory wage system on longtime drivers and warehouse workers in Sacramento and Stockton, many of whom have an immigrant background.Teamsters

“The workers that distribute Coors products throughout Northern California are appealing to San Franciscans today,” said Sam Rosas, Secretary-Treasurer of Local 439 in Stockton. “We want our neighbors to know that in this devastated economy, DBI wants to destroy good jobs. All these loyal workers want is a contract that respects the work they do.”

The action got plenty of attention in the tweetosphere: