Why strike Hostess? It's the management, stupid 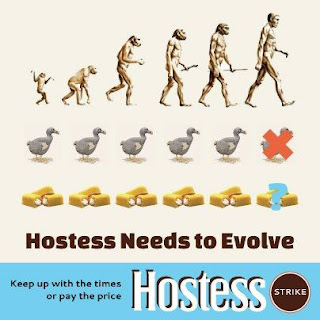 The Hostess executives who looted the company while mismanaging it are (predictably) blaming the union for their own incompetence.

Yesterday was the last day of bankruptcy hearings in which the company asked a judge to abrogate union contracts.

You have to ask: Is it the drivers' fault that the Twinkie hasn't changed since 1933, when even Jell-O and Apple Jacks have reinvented themselves?

As the Boston Globe reported,
...consumption of healthy snacks is growing. About 32 percent of Americans ate yogurt at least once in two weeks in 2011, for instance, up from 18 percent in 2000.


“We’re less likely to be snacking on items that we shouldn’t be snacking on,’’ said Harry Balzer, at NPD Group, a marketing research firm.

Privately held Hostess does not disclose sales figures. But analysts said the brand has been hurt by changing eating habits.

And consider how the company failed to streamline management. Rural Route, in a terrific DailyKos post, "Overpaid? A Day in the Life of a Hostess Brands Driver", explains:


At these twenty odd stops you often meet the other Hostess Brands drivers- the Hostess Cake driver from your depot, the Holsum Bread driver from their own depot just across town from yours, and the Dolly Madison Cake driver who runs out of a garage in the rental storage place. Yup, Hostess Brands has four delivery trucks and drivers delivering to essentially the same places, as over a decade after merging Continental and Interstate Baking they still haven't consolidated operations. The company claims union work rules won't let them consolidate, but you know that's BS- you've been through "dovetailing" by seniority before, and had a year long layoff to prove it. You and the other drivers suspect they keep the operations separate to avoid laying off all the multiple managers, who seem to often to be related to each other.

It's a great read, laying bare the long hours made longer by bakery screw-ups, the antique trucks, the dangerous driving conditions, the worn-out uniforms. You'll understand why Hostess Brands employees are good and ready to strike.
Posted by Teamster Power at 12:09 PM