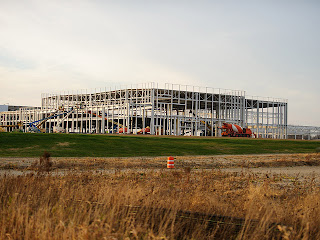 We're just going to cross-post this from We Party Patriots. It's an outrage that doesn't need embellishing:


When President Obama and Vice President Biden broke ground at two Michigan electric car battery plants in 2010 — both built with $300 million of stimulus money — unemployed workers in the region rejoiced. Two years later, though, it turns out that the two Korean companies in charge of the plants, LG Chem and Dow Kokam, have used many Korean parts and hired Korean nationals to fill jobs, according to CBS.

Adding to the outrage is LG Chem and Dow Kokam’s ignorance of transparency on the matter. The number of Korean workers currently working in Michigan on the projects is difficult to ascertain.  The two companies claim all of their workers are skilled workers, but Michiganders nonetheless feel slighted. Training of Americans on U.S. soil is what they want.

Unions, which have received little cooperation in their inquiry, have filed a Freedom of Information Act (FOIA) request, hoping to look at LG Chem’s payroll.

The stimulus brought new jobs to Michigan, and for that everyone is thankful. It just seems that not all of these jobs were filled by Michigan workers…or American workers at all for that matter.