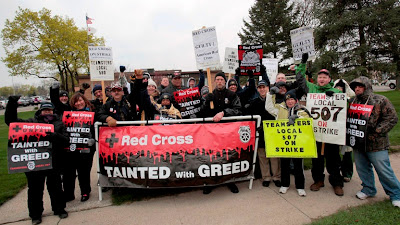 We came across a terrific letter to the editor of the Cleveland Plain Dealer this morning, which we will share in its entirety:


The strike against the Red Cross Northern Ohio Region by the collections staff of Teamsters Local 507 has been going on since Feb. 14. We have been without a contract for more than nine months.

Just to let everyone know, the Great Lakes Region in Michigan and the Western Lake Erie Region in Toledo also have gone on strike. Their contracts expired more than five years ago and two years ago, respectively.

Here are some facts: The union made many proposals to the Northern Ohio Region management. All were rejected.

•Better health insurance. Benefits have been getting progressively worse over the years. The union wants better coverage and lower deductibles. Management has rejected the offer.

•A slight increase in pay.

•A scheduling system that works. This leads to other issues like overpresentation of donors and long wait periods so staff may take breaks and lunches.

•A good working plan (on-call system) or something to help staff when there is overpresentation. For those of you who donate, you know and understand what I am talking about. We workers try our best to get you in and out in a timely manner. You have seen the staff work long hours and skip our breaks and lunches.

The staff on strike are not money-hungry people (as presented in the newspapers, radio or television) or people who do not care. We care so much! We have stayed out for more than six weeks and will continue until a just resolution to our issues is reached.

We have a staff member who has been with the organization for more than 30 years, and many have more than 15 years of service. Why do you think they are on strike and not earning a paycheck? It is for our donors, their safety and for the workers to be treated fairly.

You would think that, according to Forbes.com, a $3.6 billion nonprofit would have the money to offer its employees more. But I guess the organization would rather pay its executives large salaries and make the workers all part-time. The evidence is already in writing. I have seen the proposals offered to the other unions in Michigan and Toledo. They propose to eliminate a guaranteed full-time work week, to not increase pay, and to allow no breaks or lunches during blood drives.

But Gail McGovern and all the other CEOs and executives across the United States can sit back and make their big salaries and actually say they care about people?

Posted by Teamster Power at 9:29 AM