Alan Uke, a San Diego manufacturer of scuba diving gear, calls our trade policy "a football game in which they tackle and we don't." He's written a new book, "Buying America Back," that has some good ideas about promoting American manufacturing. 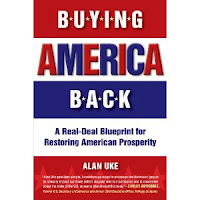 Uke also has an idea for a way consumers can buy more products from countries that trade fairly with us. He argues that goods made overseas be labeled with a trade ratio. That's the difference between what a country buys and sells from us. S. Korea has a 79 percent trade ratio with America because S. Koreans spend 79 cents here for every dollar we buy there. China spends 25 cents here for every dollar we buy there. If televisions were labeled with trade ratios, we're quite certain Teamsters would be taking that Daewoo TV set to the cash register. No Shenzhen sweatshop products for us!

We love, by the way, how the interviewer on the video asks Uke if he's asking consumers to put value judgments on what they buy.