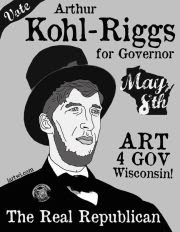 Before Dairyland Dictator Wisconsin Gov. Scott Walker meets his Waterloo on June 5, he must first get past Arthur Kohl-Riggs in the May 8 primary election.

Kohl-Riggs is an activist who runs the "Sh*t Scott Walker Is Doing To My State" Facebook page. Kohl-Riggs was arrested three times for bringing a video camera into the Wisconsin General Assembly. Seriously. Lawmakers don't want people recording what they're doing in the legislative chambers behind the cheese curtain.


Arthur Kohl-Riggs, a scruffy-haired 23-year-old political activist who used to serve pizza at the Children’s Museum in Madison until a few weeks ago, says he is not a "fake Republican."

But he’s not a traditional Republican, either.

Kohl-Riggs is running against Gov. Scott Walker in the Republican primary after he collected and turned in more than 2,200 signatures to the Wisconsin Government Accountability Board this week. If the GAB, which oversees elections in Wisconsin, votes to allow him on the ballot, Kohl-Riggs will be Walker's sole opponent in the May 8 primary.

Four Republican state senators also stand for recall on June 5. And four fake Democrats (Republicans pretending to be Democrats) are running against their Democratic challengers in the May 8 primary. Wisconsin Public Radio reported,


...some of those races would have been held earlier if Republicans hadn't found a way to delay the elections. The state GOP recruited fake Democrats to force primary elections, a move real Democrats say is illegal. ...To be clear about these fake Democrats, they are really Republicans recruited by the Republican Party to run in Democratic primaries. Republicans are not hiding this fact. Scott Fitzgerald is the Republican leader of the State Senate and faces a recall himself. He says these elections are hardball politics, and these candidates help the GOP fight back.