UPS worker killed on the job. It's why we mourn the dead and fight for the living. 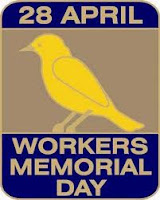 Memorial services are held today and tomorrow for Michael Rogalle, a 39-year UPS veteran who died on the job in an SUV accident in Lower Manhattan.

He's not the only worker killed at work recently. Twelve people die at work on an average day.  Add in people who die of occupational diseases, and that number goes up to 150.

Do a quick google news search using the words "worker" and "killed" and we guarantee you'll get plenty of results.

That's why we mourn the dead and fight like hell for the living.


Manhattan crane czar James Lomma, whose greed prosecutors said led to the horrific deaths of two hardhats, was acquitted of manslaughter Thursday by a judge who offered the victims’ families not one word of explanation.


A massive explosion and fire at the Lakeland sawmill on Monday evening has claimed a second life.


A newlywed and expectant father in New Hampshire was killed by an exploding beer keg. Ben Harris, 26, a worker at the Redhook Ale Brewery in Portsmouth, was filling a plastic keg with air to remove old beer on Tuesday when it burst, peppering him with shrapnel.

The Associated Press reported a Vermont utility worker was killed at work:


53-year-old Russell Callahan was installing high speed internet service Wednesday afternoon when part of the bucket truck he was operating hit a power line. Authorities say he was electrocuted and then fell backward and hit his head.


Nicholas Rutkowski, of Frenchtown, died on the job site Wednesday morning while he worked with a crew of three removing a tree at the Sky Farm nudist club on Allen Road.

Tomorrow is International Workers Memorial Day and events are planned throughout the world. You can find a worker's memorial event near you here.
Posted by Teamster Power at 1:08 PM