Walker to get a big OK Teamsters greeting on Wed. 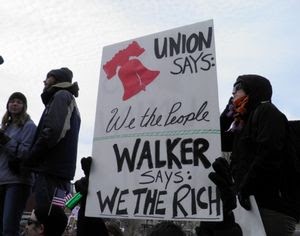 Dairyland Dictator Wisconsin Gov. Scott Walker will find out what Oklahoma Teamsters think about his union-busting on Wednesday when he comes to Oklahoma City for a fund-raiser. He probably won't like it much.

When the Fab 14 senators fled Wisconsin last year to prevent union busting, Walker told them "Come back and do your job." He should talk. Walker spends most of his time traveling around the country collecting checks from his rich friends for his June 5 recall election.

In fact, he spends 15 times as much of his time on "personal time" as he does governing. According to his own schedule, Walker spent 44 hours on government work from August through January. He spent 614.63 hours on personal time over the same 6 months. (Nice work if you can get it. And keep it.)

Anyhoo, Oklahoma Teamsters and some of their brothers and sisters from Wisconsin will try to make Walker regret he left the state he's supposedly governing. Local  886's website provides the details:


Scott Walker, the Governor of Wisconsin, who has spear-headed the movement to bust labor unions in Wisconsin by taking away their collective bargaining rights, is coming to OKLAHOMA. Mr. Walker is here for a fund raiser and to advise our governor and politicians how they too can accomplish what he has done in Wisconsin.

Oklahoma Labor Organizations, Church Groups, Teachers and other Civic Groups are preparing a rally to greet Governor Walker to express how we here in Oklahoma feel about his actions and legislation. A rally will be held at 5:00 pm, Wednesday, April 11, 2012, gathering at the Howard Johnsons Knights Inn Motel right next door on the west side of the Cowboy and Western Museum. Their address is 1400 NE 63rd (CAR POOLING IS ENCOURAGED).

We're also proud of our brother and sister Teamster thugs for making it an event that benefits charity. ("Thug" stands for "Those Helpful Union Guys".)


We will be serving a ham and bean fund raising dinner along with other refreshments for charity. Donations will be accepted, all proceeds going to kids at Capitol Hill High School needing eye glasses through the work of Rev. Lance Schmitz. Everyone is encouraged to come and participate. Bring family members, co-workers, and friends. We will be accompanied by people from Wisconsin who will also be expressing their thoughts to Governor Walker.

Way to go, Oklahomans!
Posted by Teamster Power at 1:43 PM