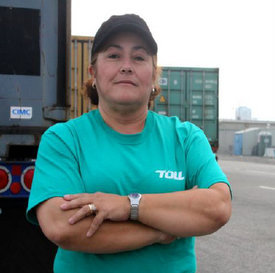 Hat tip to Laura Clawson at Daily Kos for this post about the 62 Toll drivers at the Port of Los Angeles:

It's been a hard road to get to this point, but California-based truck drivers for Australian company Toll Group are getting a vote for union representation on Wednesday. Toll Group workers in Australia are unionized, but the company has waged an intimidation campaign against the 62 California drivers who will be voting on whether to join the Teamsters in an extremely rare union election in this industry sector. In March, Xiomara Perez, a union activist and one of a handful of women drivers, was fired for taking an emergency bathroom break. Less than two weeks later, Steven Chavez—also a union activist—was likewise fired on an obvious pretext:

Mr. Chavez used his Tuesday lunch break to renew a vital Department of Transportation certificate, a federally-mandated public safety requirement that must be current to hold a commercial drivers’ license and legally perform his job duties. Though he received verbal clearance after notifying his supervisor that morning he needed to renew his proof of medical and physical aptitude, that afternoon Toll’s management flimsily claimed he was being fired for making a persona[l] errand.

Laura reminds us that the workers will have vivid memories of how far the company will go to retaliate against workers who support unions. Fingers crossed...

And read more about the port campaign at the Clean and Safe Ports website.

Posted by Teamster Power at 4:53 PM