Teamsters to greet Walker in OK, IL and MI 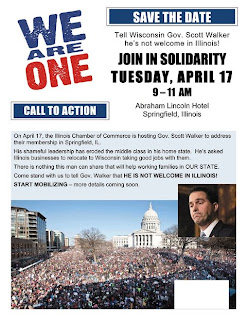 We anticipate a big turnout for the rally against Dairyland Dictator Wisconsin Gov. Scott Walker tonight in Oklahoma City. It's organized by Teamsters Local 886.

Our Oklahoma brothers and sisters don't like Walker's attacks on working families. His economic policies, brought to Wisconsin by the American Legislative Exchange Council, are bringing the state to its knees. Since he was sworn in, Wisconsin has the worst job-creation record of any state in the union.

Anyhoo, we understand the hotel next to Walker's venue tonight -- the Cowboy and Western Museum -- is sold out because of the protest. We're looking forward to seeing pictures and tweets of the big event.

Oklahoma Teamsters aren't the only ones planning welcome parties for Walker. On April 17, Central Illinois Teamsters and members of other unions will be letting Walker know what they think of him in Springfield. The "Go Home, Walker" rally is likely to be another big event.

That night in Troy, Mich., Walker will face another protest at a fund-raiser with Michigan Gov. Rick Snyder. Walker and Snyder are equally popular, and our brothers and sisters in Michigan will hold a rally against the "co-conspirators against the 99%." The flyer says,

Michigan Republicans are hosting a fundraiser at the San Marino Club in Troy featuring Wisconsin Governor Scott Walker, a fellow conspirator with Governor Rick Snyder in the assault on working class families. In peaceful protest, we will deliver a subpoena calling on Walker and Snyder to account for their shared agenda of cutting taxes on the corporate rich, shifting taxes to the 99%, slashing social services for people in need, and stripping voters and working people of their rights.


The Defendants are Hereby Ordered:

To answer charges that they have conspired to wage class war on working and middle class families.

As Evidenced by Their Common Agenda:

· Cutting taxes on corporations and the wealthy while shifting the tax burden onto working people and the poor.
· Cutting funding for public schools and shifting resources to private charter/voucher schools for select students.
· Slashing vital safety-net programs: long-term unemployment benefits (MI), Medicaid support for low-income patients (WI), and assistance for low-income families with children (both).
· Stripping workers of their right to bargain collectively with their employer over pay and working conditions.
· Reducing revenue sharing to cash-strapped towns and cities.
· Shrinking state support for higher education, shifting the cost to rising tuition and spiraling student debt.
· Subverting democracy by restricting voter access (WI) and removing elected officials from local office to impose state control of finances (MI).

The oil billionaires Charles and David Koch of Wichita, Kansas, give millions in campaign dollars to Republican Governors and millions more to right-wing super pacs and think tanks, including the American Legislative Exchange Council (ALEC). ALEC distributes “model” legislation for enriching the 1% to lawmakers around the country, including Michigan and Wisconsin.