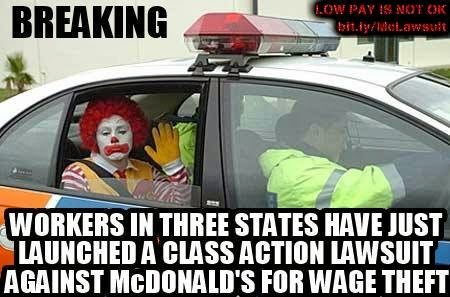 
McDonald’s workers in three states are suing the corporation and its franchisees over alleged wage theft, opening a new front in the embattled U.S. labor movement’s effort to transform a mammoth industry.

“I knew I wouldn’t be making a lot of money, but I thought a well-known company like McDonald’s would treat me fairly — at the very least follow the law,” plaintiff Jason Hughes told reporters on a midday call announcing the suits. “We brought this lawsuit because neither has happened.” Workers allege forms of “wage theft” – failure to pay legally required compensation – including under-compensated overtime in California; uncompensated time cleaning uniforms in New York; and being required to show up, but not allowed to clock in, when business is slow in Michigan. McDonald’s did not immediately respond to a request for comment.

Last year, a survey of 500 fast food workers found 84 percent had wages stolen from them by refusing to pay overtime, reimburse them for delivery expenses or missing breaks.

Teamsters are also fighting wage theft on a number of fronts, including the ports. There, trucking companies misclassify employees as independent contractors, forcing them to pay for insurance, repairs and gasoline out of their own pockets.

In a recent report, Big Rig Overhaul, authors concluded port drivers were victims of wage theft “amounting to $5,072 per driver per month.”

In California, the Teamsters have helped more than 100 drivers file individual claims for wage theft with the California Division of Labor Standards Enforcement (DLSE). Two misclassified drivers who haul shoes for Skechers were unlawfully fired in January for filing claims for wage theft and have filed Unfair Labor Practice charges against their employer.

You can help the port drivers by signing a petition here.

Posted by Teamster Power at 5:35 PM