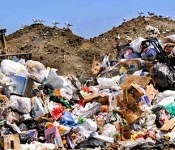 Republic Services is breaking the law in San Jose by refusing to pay workers living wages for the hard, dangerous work they do, according to Brother John Bouchard, business agent for Teamsters Local 350 in Daly City, Calif.

Brother Bouchard posted a story in The Left Hook blog today about Republic's theft of wages from workers at the Newby Island Recyclery. He tells us:


Republic Services is the second largest solid waste and recycling company in the world, and they are the company that runs Newby Island Recyclery, a state of the art recycling facility that uses hundreds of unrepresented workers to sort the various commodities that are brought in and processed there.  These workers perform extremely difficult work in poor conditions.

They don’t have any benefits, and are only paid the city’s minimum wage; about half of what sorters make for other companies.  Republic has refused to pay them the living wage, as called for in their contract with the city of San Jose.

Why, you ask, are these workers only paid the minimum wage?  Because Republic Services feels that they are above the law, and that the living wage provision in their contract with the city does not apply to this group of workers.

As members of this community, we should all be extremely concerned about this lack of respect, and blatant disregard for worker’s rights.  This wasn’t just a simple oversight.  It was an intentional cost-saving move at the worker’s expense.  The city of San Jose has brought the violation to Republic’s attention, and Republic is still disputing whether or not they are obligated to pay the required wages.

Republic Services owes more than two million dollars in back-pay to affected workers, and could face more fines from the city for not complying with the ordinance.  This has been dragging on for months, and as of today, the issue has not been settled due to Republic’s continued appeals.  This company ought to be ashamed of itself, skirting the law instead of flouting it in the face of the 10th largest city in America.

We especially like Brother Bouchard's explanation of why living wage ordinances are important:


... for those workers that are non-union, living wage ordinances may be the only wage protection they have...They are meant to ensure that workers are provided with fair wages for jobs performed in the areas in which they live and work.