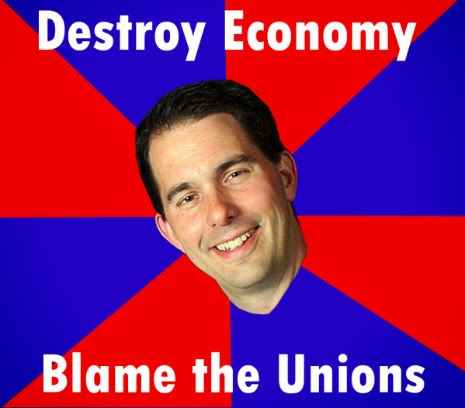 Ever since job-killer Wisconsin Gov. Scott Walker began to cut the government budget and weaken unions, the state's economy has tanked.

Candidate Walker famously promised to create 250,000 jobs as governor and then set about destroying them.  He awarded state contracts to out-of-state companies, pulled the plug on a high-speed rail project, lowered state worker pay by taking away collective bargaining rights, made massive cuts to education and slashed taxes for business.

Chances of Walker creating 250,000 jobs are now slim and none, and Slim just left town.

The Econbrowser blog estimates Wisconsin would need to create 12,275 jobs per month for the next year to achieve Walker's goal. During Walker's administration, an average of 2,892 jobs were created every month.

Wisconsin lags the U.S. economy and all of its neighbors, as this chart shows: 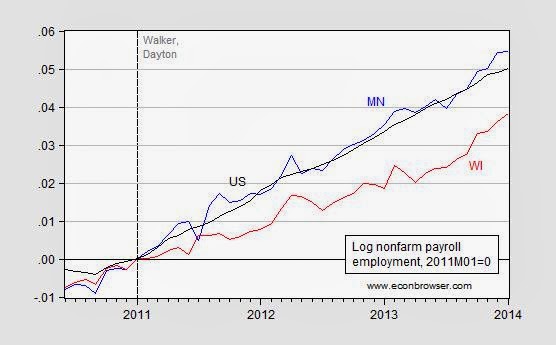 The Minnesota example is especially compelling. Minnesota is similar to Wisconsin in size, population, climate and industry. But there's an important difference: Minnesota's government. A story in MinnPost late last year reported:

The lion’s share of Minnesota’s new tax revenue was sunk into human capital. While the state’s Constitution required that half of the new revenue balance the budget in 2013, Mr. Dayton invested 71 percent of the remaining funds in K-12 schools and higher education as well as a pair of firsts: all-day kindergarten and wider access to early childhood education. Minnesota was one of the few states that raised education spending under the cloud of the Great Recession.

Posted by Teamster Power at 3:57 PM