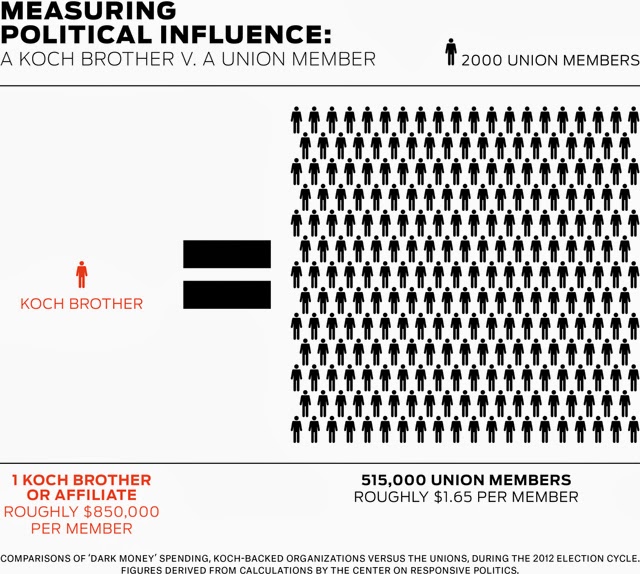 The Koch brothers' campaign finance network of about 200 people spent $170 million on the 2012 election compared to unions' $24 million.

This is important to remember because anti-worker politicians and their stooges are saying 'Big Labor' vastly outspends sociopath billionaires. Don't believe it.

The comparison is not precise, but it’s good enough to get a sense of scale. Using the same basic math—the Koch-affiliated organizations have about 200 supporters, including the Koch brothers, according to Maguire—that works out to about $850,000 of influence per Koch brother and $1.65 per union member.

U.S. Rep. John Sarbanes wants to change the law to give more say to people who are not billionaire sociopaths. He's filed a bill to use some  public money to fund political campaigns. Public Campaign tells us:


Reps. John Sarbanes (D-Md.), Alan Lowenthal (D-Calif.), and Beto O'Rourke (D-Texas) spoke on the House floor Wednesday night about the influence of money in politics and the need for Congress to pass the Government By the People Act (H.R. 20), legislation to raise the voices of everyday people in the political process...

"The franchise is the most important thing in a democracy. It's the foundation of what American democracy is all about, protecting that franchise...but if people go into the voting booth and they pull that lever, and they excercise that franchise, and the person they send to Washington, the day they arrive, that person has to start representing big money and special interests, then what happens to the franchise?

"The journey of empowerment, getting to the ballot box is just part of it. You have to protect that franchise so when a candidate gets there, they can keep representing the interests of the people. And that's what the Government By the People Act is all about."

Posted by Teamster Power at 4:36 PM