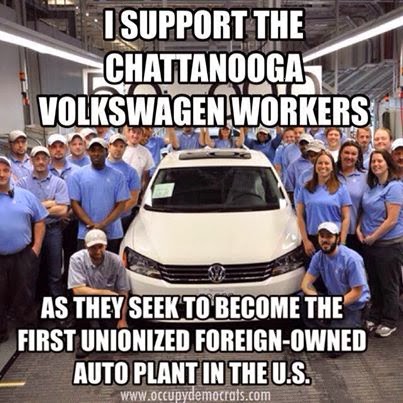 During the UAW's recent organizing drive at VW in Tennessee, a group secretly funded by business masqueraded as legitimate workers' representatives. This phony worker group campaigned against the union.

The UAW is understandably furious about that -- and even more furious that the National Labor Relations Board is letting the group challenge the UAW's request for a new election.

All of this is on top of the anti-union billboards plastered all over Chattanooga by political grifter Grover Norquest and intimidation and lies by Tennessee Sen. Bob Corker and local officials. They threatened to withhold incentives from VW (which remained neutral in the fight) if the UAW were voted in. And they hinted a plant expansion wouldn't happen if the workers voted to unionize.

Labor professor John Logan summed up what happened in The Hill:


In Chattanooga, an employer respected workers’ right to choose, but the threats and intimidation of anti-union extremists and Republican lawmakers pressured Volkswagen workers into voting against the union.

The UAW, which lost by a mere 44 votes, asked the NLRB for a new election. The Atlanta Region of the NLRB is letting the phony workers' group challenge the UAW.


...groups with shadowy funding that are masquerading as legitimate worker representatives to participate in the process to determine whether the UAW election at Volkswagen was tainted by state and federal politicians’ threats of retaliation against workers.

The UAW recounted the 'two-week barrage of anti-UAW propaganda, outright lies, distortions, and threats about the viability of their plant.'


They have mocked the NLRB process and have denigrated workers who are demanding that the federal government enforce their right to have an election free from outside interference.

One of these groups, ‘Southern Momentum’ – an ally of outside groups like Grover Norquist’s Americans for Tax Reform and the National Right-to-Work Legal Defense Foundation – claims to be an organic group of Volkswagen workers who came together of their own accord to participate in the election campaign.  Instead, Southern Momentum, registered at a management law firm, disclosed after the election that in two weeks, it raised “funding in the low six figures” from “businesses and individuals” rather than Volkswagen workers, according to Reuters news service.

With this secret business funding, this “grassroots” organization also hired one of the nation’s largest anti-union firms, Projections, to create propaganda for their anti-union campaign. Southern Momentum neglected to publicly disclose these facts during the election campaign.