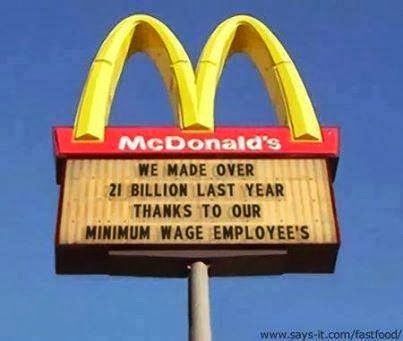 Raising wages creates jobs, contrary to what a lot of anti-worker billionaires and their political stooges will tell you.

Bloomberg News tells us today the state with the highest minimum wage led the nation in job creation:


When Washington residents voted in 1998 to raise the state’s minimum wage and link it to the cost of living, opponents warned the measure would be a job-killer. The prediction hasn’t been borne out.

In the 15 years that followed, the state’s minimum wage climbed to $9.32 -- the highest in the country. Meanwhile job growthcontinued at an average 0.8 percent annual pace, 0.3 percentage point above the national rate. Payrolls at Washington’s restaurants and bars, portrayed as particularly vulnerable to higher wage costs, expanded by 21 percent. Poverty has trailed the U.S. level for at least seven years.

In San Francisco, unemployment went down when the minimum wage went up. ThinkProgress reports,


San Francisco experienced similar growth after increasing its minimum wage in 2004. ... in the seven years that followed, employment grew by more than 5 percent in the city, while other Bay Area counties experienced drops. Employment for restaurant workers also increased by 17.7 percent, faster than elsewhere in the Bay Area. Generally, states that increased base wages between 1987 and 2012 saw decreases in their unemployment rates 52 percent of the time.

It's time to raise the minimum wage.