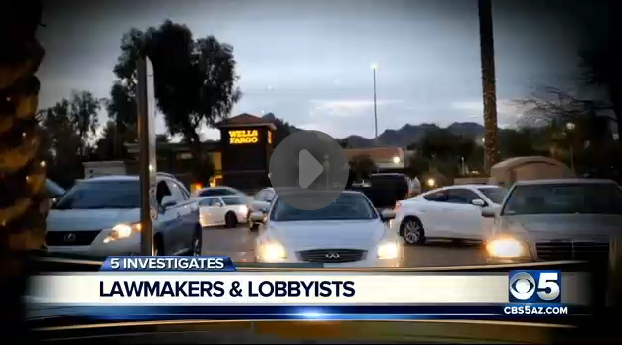 It didn't look good for ALEC to be holding an expensive backroom party for 17 state lawmakers, especially since ALEC claims it's a charity that doesn't do much lobbying.

"Are they buying access to your state leaders?" CBS 5 asks rhetorically. And then answers its own question, calling the story "an exclusive look at how one of the countries' most controversial nonprofit organizations influences state leaders."

The camera "spots state lawmaker after state lawmaker, along with lobbyists and power brokers heading into a backroom -- a closed-door dinner with an open bar at a restaurant with $70 steaks."

You can watch the video here.

Rep. Debbie Lesko, ALEC's state chairman, said ALEC is "no different than any other organization." (We love that she said she "talked about what ALEC offers."

Well, yeah, it is. ALEC lobbyists get access to lawmakers that environmental activists and union members don't.

And CBS 5 reporter Morgan Loew checked and found four ALEC bills before the Arizona Legislature. The voting records of the 17 lawmakers at the ALEC party showed none of them voted against ALEC bills.
Posted by Teamster Power at 12:30 PM